Macramé may be best known for its bohemian run in the '60s and '70s, but the textile art form of knotting and hitching is believed to have originated in the 13th century and was all the rage in the Victorian era. After its fall after the late ‘70s macrame is having a comeback as trends shift toward more boho and eclectic decor and fashion again. This has inspired innovative artisans, crafters, and designers to continue to recreate this knotted and woven art to make its heavily textured patterns look better than ever in today's home and in bohemian street styles. There seems to be room for this trend to flourish again! 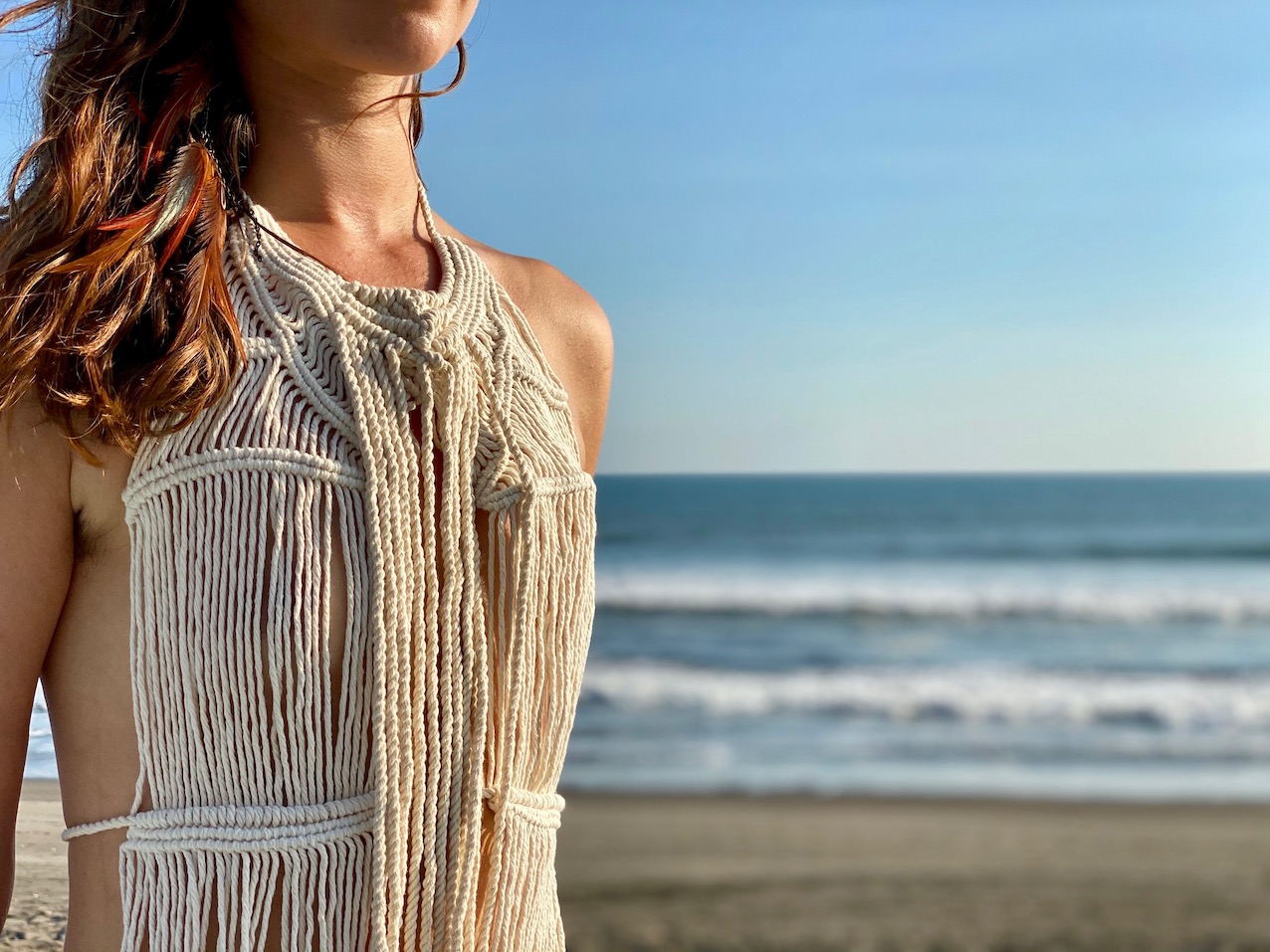 Making your own indoor diy macrame projects such as creating a stunning dream catcher or a plant holder (or hanger) that is hanging from the ceiling are a window to the garden of lost form of arts. Design your own tapestry in your apartment bedroom by using just rope as a material of supplies. The  favorite item you have crafted might be a perfect trade or a gift idea.

Macramé is a form of textile art of tying knots from any kind of cord in geometrical patterns. Macrame is produced by creating knots with multiple strings, tied in a decorative way without using any tools other than your hands, and of course some additional beads of wood or metal if that feels right. Therefore macrame differentiates from crochet as crochet is done with a single thread, drawn through previously made loops with a crochet hook. The word ‘crochet’ is derived from the Middle French word croc or croche, which means ‘hook’, which makes macrame and crochet two entirely different crafts.

An adaptable form of fiber art, macramé can be used to make everything from wall hangings and plant hangers to jewelry, purses, and even clothing items. Using simple materials like cotton twine, jute, hemp, or yarn, macramé can be as simple or complex as the crafter would like.

What is bohemian style?

Bohemian style, also called ‘boho chic’ or ‘boho’, is related to a hippie fashion style, in which natural fabrics, retro patterns, neutrals and warm shades merge with ‘70s style accents and a flair for statement accessories, and overall artistic, creative mishmash of elements and loose shaped clothes. Basically everything within those guidelines goes together. The fashion that is labeled as bohemian represents the lifestyle ideology that comes with it: an alternative to the traditional way of dressing, paired up with an equally alternative, more liberated lifestyle and a social attitude against everything from materialism to society’s pressure.

Bohemian fashion is relaxed, unconventional and expressive form of art. Like hippies, ‘bohemians’ are free-spirited and refuse to dress in order to conform. Bohemian style is much more than just a fashion trend - it’s a culture with a very specific ideology and complicated history. 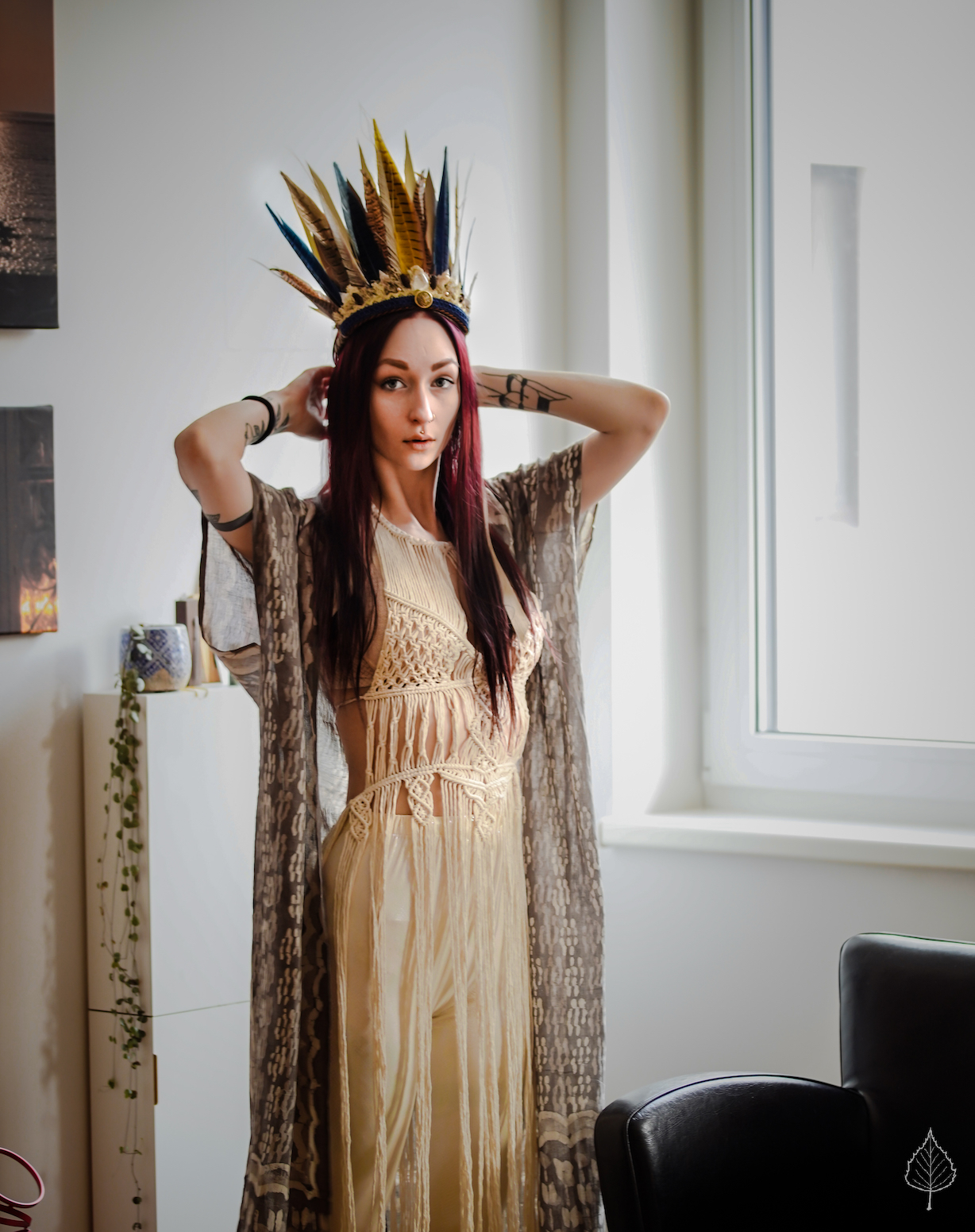 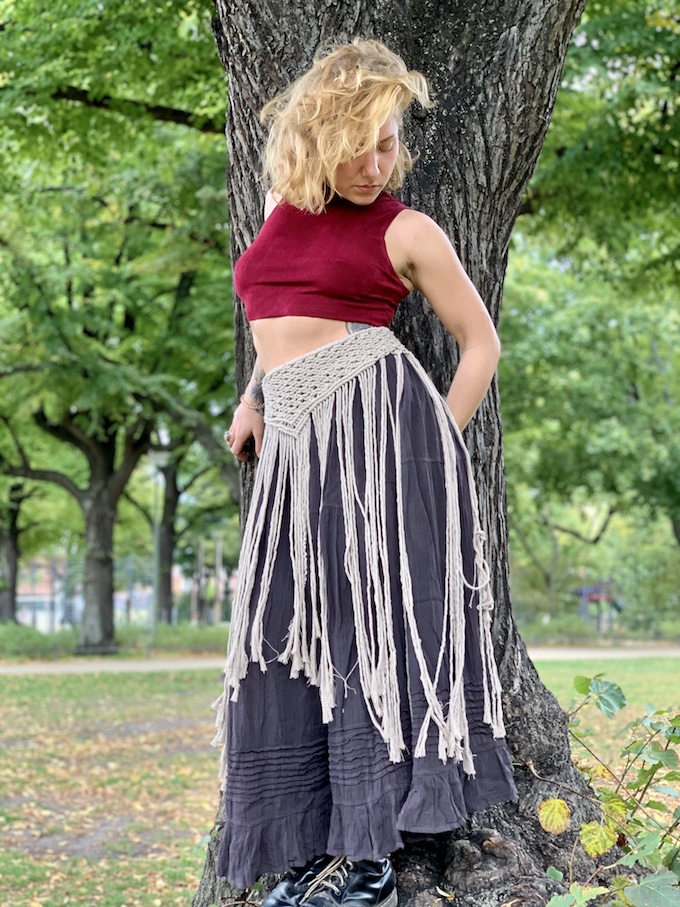 How to create a boho style

What you need is no more than 20 essential key pieces you can mix and match easily. From tops to bottoms and from outerwear to accessories and one-pieces. TAIKA macrame tops and accessories are a perfect expression of a bohemian hippie style, and are easy to mishmash with other bohemian apparel, and patterns because of their neutral colour. Combining TAIKA products guarantee a unique look that stands out from the masses. All TAIKA products are handmade and therefore unique pieces.

Below you can see some good ideas for boho macrame features.
TO THE SHOP 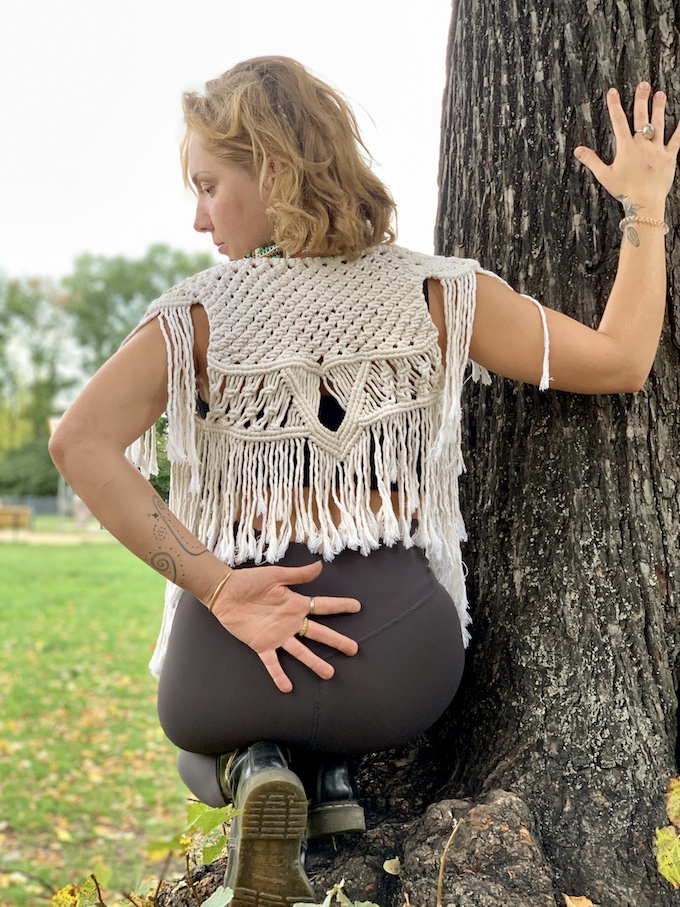 Macramé vest - SAAMI white
Boho warrior macramé vest with exquisite details and short fringe. This wearable art piece is definitely one for the collection for those who love to dress to impress. The shoulder badges create a grand nordic warrior look, and its impressive details stand out from the standard.The vest is handmade with love and intention.MeasurementsSize SShoulder width to the seam: 36 cmShoulder width to the shoulder padge: 51 cmLength front: 62 cmLength back: 41 cmOr ask modified measurements.ColourOff whiteMaterial100 % recycled cotton 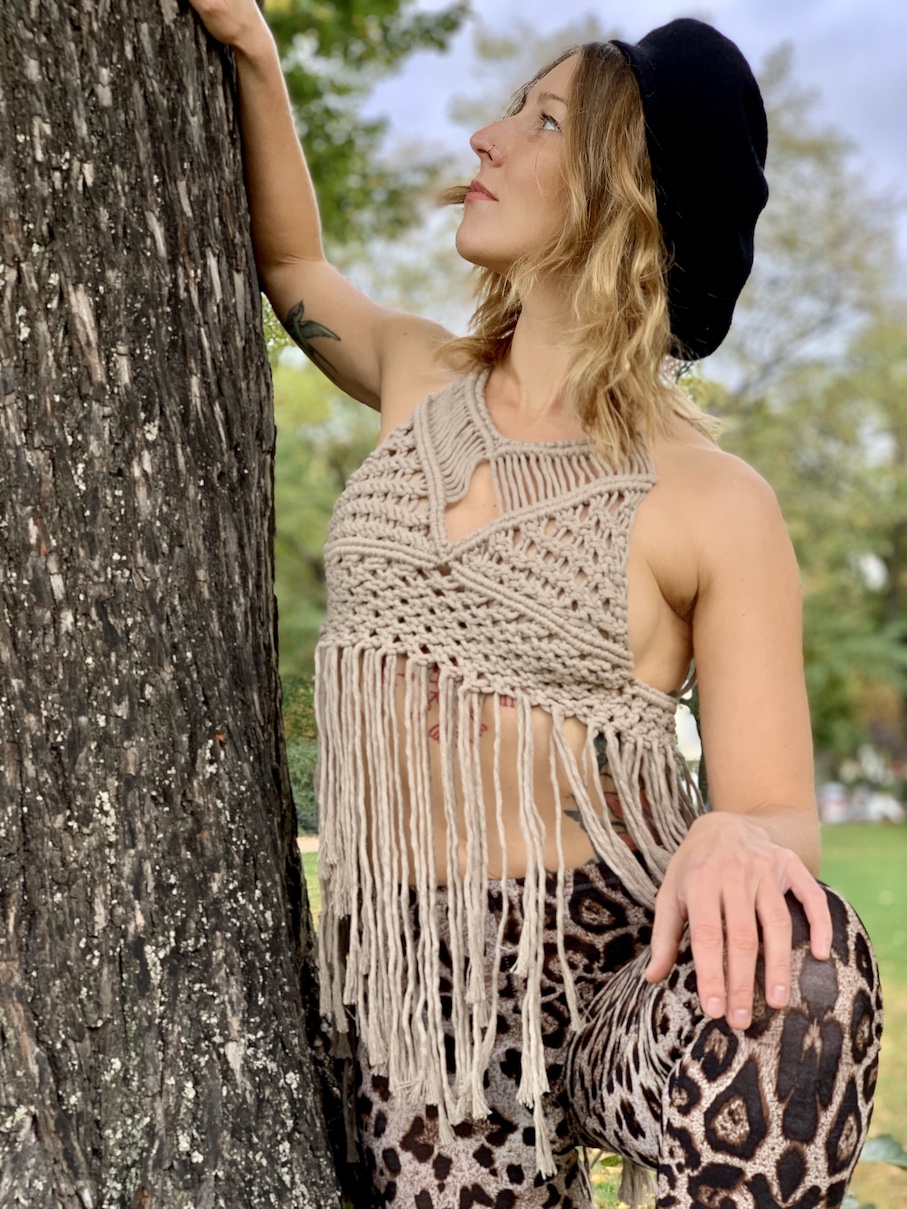 Knotted macramé tank top - FRIDA
Exquisite light brown bohemian style knotted macrame tank top with tassels. This macramé top has special pattern that is combining comfortability and style with its stretchy essence. It has beautiful details both in the front and back. The details in the back leave the middle back area open. Its tassels arte fun to play with as they sway in the wind.This tank top is influenced by dystopian apocalyptic movies such as Madmax or Matrix. Create your favourite style by combining your everyday outfits with this extraordinary art piece.MeasurementsSize SBust width: 33 cmBust length: 23 cmBust around up to: 86 cmLength: 53 cmColourLight brownMaterial100 % recycled cotton 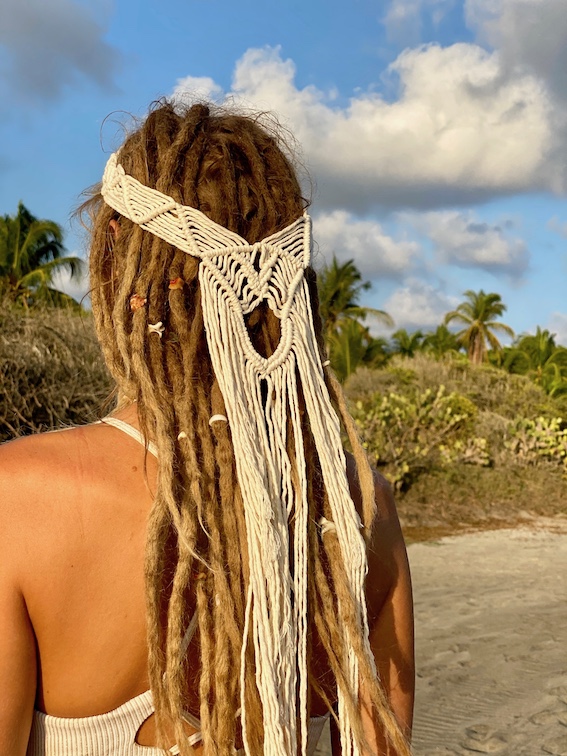 Boho macrame wedding veil - MERMEJITA
Exceptional macrame veil is ideal for an alternative bohemian wedding. Beautifully ornamented macrame patterns flatter any boho wedding style, and its long strings in the back settle alongside the open hair swaying in the wind together with it. The macrame veil is extremely soft and pleasant to wear. It is handmade of recycled cotton strings and follows the ecological and ethical slow fashion movement. MeasurementsAround: 63Length 68 cmColourLight mint greenMaterials100 % recycled cotton

The origins of the trend are in the heart of the  Balkan area of Eastern Europe, in a region called Bohemia. Bohémien was a common term describing (often in a pejorative way) the Romani or “Gypsy” population of France, who originated in northern India and arrived in Mid-West Asia and Europe around 1,000 years ago. Literary ‘bohemians’ and the Romani were both outsiders, apart from conventional society and untroubled by its disapproval, which later on transformed into a subculture amongst the artist and creatives.

The first mention of the Bohemians was in the end of the 18th century during the time of the French Revolution. Due to the social and economic conditions, artists and creatives were forced to live in poverty. As a result, the artists of the time started wearing used and old clothing. Soon after, once the economic climate stabilized, artists began expressing their creative side more through clothing – and more often than not, in eccentric and highly artistic ways. The groups started incorporating flowy and large garments, oriental-inspired clothing, medieval elements and colorful materials in their preferences, as well as ‘gypsy’-inspired accessories and hair, old coats and distressed fabrics. While appreciated by many at the time, these details were all very different from the mainstream fashions of the era.

Bohemianism as an ideology

As a result, ‘bohemian’ became synonymous with a culture, or, better said, counterculture, associated with creativity, artistic expression, as well as disregard to social constructs and mainstream aesthetics. Already over 200 years ago, bohemian was a term referred to an exotic sense of style, usually associated with the artists and romantics of the time, as well as with writers and certain eccentric intellectuals. Bohemian style differentiated from the mainstream fashion trends, and is defined as an alternative type of fashion at any given period in any given time. In fact, this exact definition applies to the entire history of the trend.

So what started as a necessity (dressing poorly due to poverty) became an ideology – one against materialism, pro communal living spaces, against social conventions and often against personal hygiene. The Bohemian Movement took a new course in the 1960s, one that was about to change the definition of fashion. Back when the Hippie Movement stood against conventional lifestyles, new clothing styles including ethnic dresses, embroideries, mixed prints, volume, fringe and flared silhouettes started getting popular again. The hippies rejected everything from mainstream values to materialism, and from established institutions to social constructs, which was apparent in their fashion choices that went against the streamlined, polished and classy silhouettes of the previous decade. 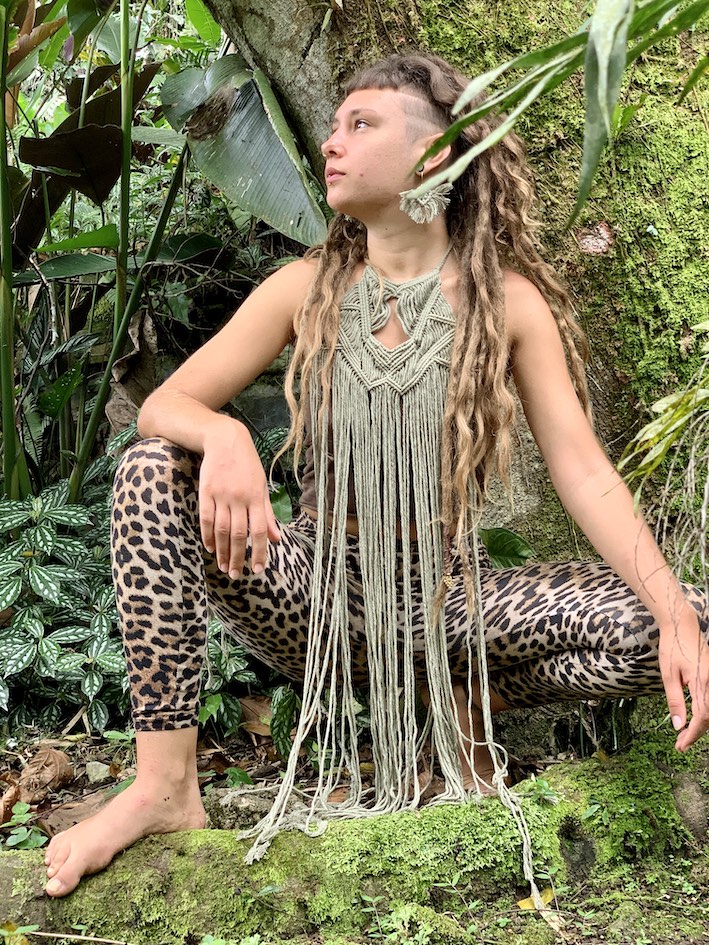 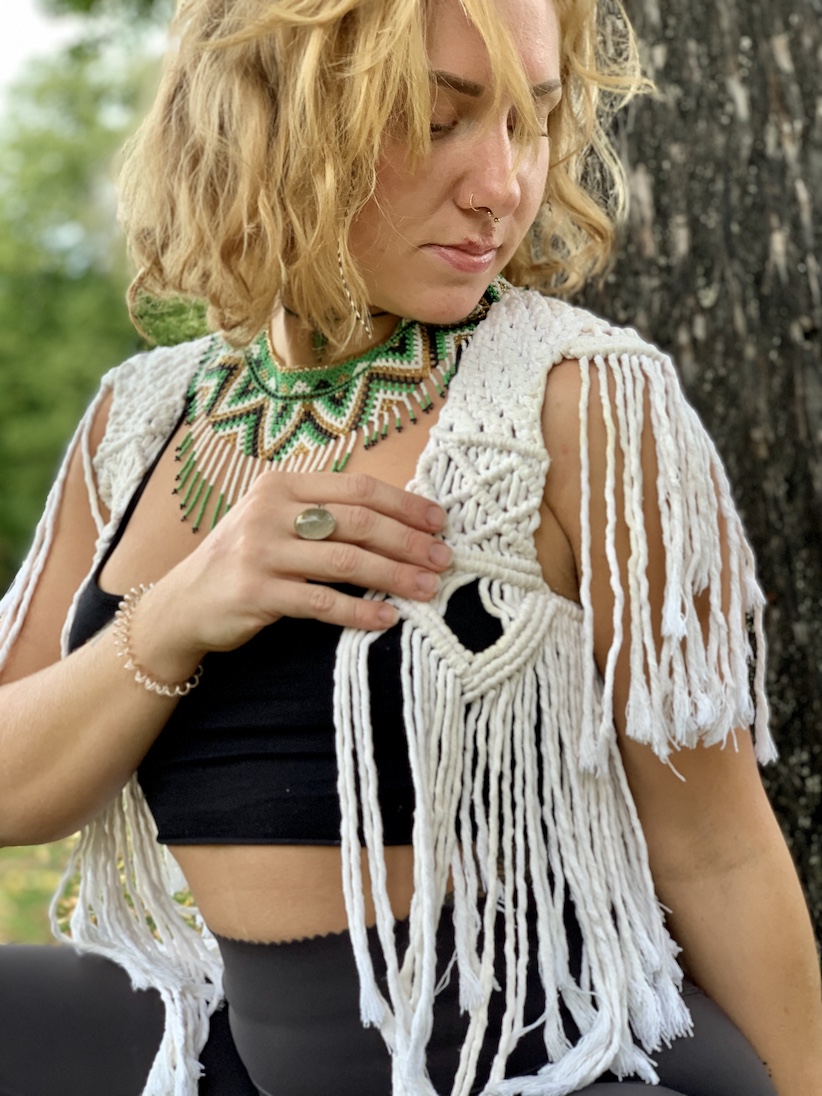 In modern use, the term "Bohemian" is applied to people who live unconventional and usually artistic lifestyles maintaining the same key values as before. A famous contemporary expression of the bohemian impulse are Rainbow Gatherings. Rainbow Gatherings are temporary, loosely knit communities of people, who congregate in remote forests around the world for one or more weeks at a time with the stated intention of living a shared ideology of peace, harmony, freedom, and respect. An American example of that is the worldwide known Burning Man festival and ideology, which is an annual participatory arts event held in the Nevada desert.

Where to find TAIKA?

You can also search for an inspiring product at TAIKA etsy site.

If you have any questions or want to read more you can order yourself the free TAIKA newsletter, or you can write on [email protected] or on any social media platform to book a session to talk about any other edition you have in mind.